A great invention that should have happened much sooner! but at least it is here; actually it’s has been around for quite sometime. I am not sure who at Scotts Company came up.

Someone at Scotts Company masterminded a great invention for people who don’t have space or enough space outdoors for a garden.  The great invention known as the Aerogarden is a great addition for any kitchen.  Not only for it’s looks, the satisfaction of having an immediate garden indoors, but also because it takes very little effort to maintain.

There are several models; ranging from small and inexpensive and large and matches its cost (relatively expensive). 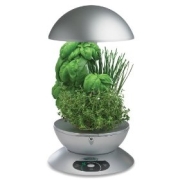 2)Aerogarden6: compact as well, comes in black and has a 6 pod capacity.  Eventhough it holds more than the first, it is lightweight and perfect for those counter top corners that are usually left empty.

3)Aerogarden7: comes in 3 colours (black, white and silver). Perfect for someone who enjoys cooking with herbs, as this version produces an abundant amount and variety of herbs. Comes with reminders for watering times, comes with more lighting than the previous versions, and can grow cherry tomatoes, peppers and others. Depending upon where you choose to buy, it is about $130-165 range in cost.

4)Aerogarden Ultra: aka beginning of the big leagues. Out of all the different series, this is the fastest growing one and comes with an easy to use programming system that allows you to set the time with lighting on/off automatic functions.  Includes 2 varieties of Basil, chives, cilantro, dill, mint, parsley and the re-invented trellis increases the chances of them growing. You are able to select what type of plants you are growing using the control panels, which will then adjust the lighting needed. Cost: mid $200 range.

5)Ultra LED Aerogarden: You have arrived!!!! Has LED lighting which increases the production rate of plants while utilizing less energy. Requires more space than the previous versions, however it allows you to harvest more.

All of these versions come with a starter kit for pods and nutrients to start with and sustain your garden for sometime.  Now, while you can harvest year round, you need to replenish pods.  As pleasant as they are and easy, it does take some simple effort.

1) pay close attention and follow the directions completely to the T.  Otherwise you most likely will end up with unsatisfactory produce or nothing at all

2) The pump is known to fail, but don’t worry.  Other than the inconvenience of not having a fully functioning product, customer service is incredibly knowledgeable and accommodating with helping or replacing.

3)The lights are very BRIGHT; therefore I recommend placing them somewhere that will not be distracting or an annoyance during night time.

4) Lighting will need replacing, roughly every 5/6 months, dependent upon which model you choose.

In the end, you end up having your own garden in your kitchen with little fuss or headaches.  And I believe I already mentioned that it makes a great, decorative addition to your kitchen.